Rehoming the contents of our classroom tank, switching to planted freshwater with fancy guppies and glass shrimp.

Would like to have someone pick up everything any time this week. Bellevue, WA. Thinking of $95 for everything. You can email or text/call me at four two *you know the last digit of the area code or can find it if you're not a robot* eight two nine five four seven three

Pair of ocellaris clownfish - one dark brownish-orange nemo style, and one slightly smaller chocolate colored. Captive bred, about a year old now. Not very large. Not in an anemone. Totally adorable begging behavior.

Neon dottyback, about a year, big and plump. Captive-bred from ORA. Loves to lurk under rock ledges. Not as shy as usual for the breed due to classroom socialization experience. ;-)

Azure damsel - couple years old, tough as nails, worth nothing ;-) totally adorable, peaceful with the other fish

Random tough as nails flattish LPS coral, something Australian I think because when a child turned the heater up to the 90s that coral was my lone survivor. About palm sized.

A couple softy corals - I think there's a mushroom, and something lovely and greenish, and a kenya tree. All small.

At least 20 pounds of modest sized and rubble sized chunks of live rock - most used to be dead coral skeletons collected from heaps washed up on Hawaiian beaches after storms. I'd rather see it go to a happy home than all the little critters die. It has tons of sponges of all sorts, a few zoanthids, and half a dozen kinds of macroalgae including caterpillar toes, feathery caulerpa, red crinkly stuff, and halimeda. It was a great water cleaning system. Tons of little copepods and such, tiny feather duster worms, tiny starfish and even a modest number of tiny limpets. Would rather see it go to another aquarium than watch all the critters die. 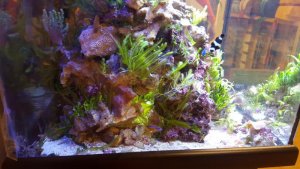 Looking to get a re-homing fee large enough to cover my purchase of new substrate ($10), plants($35), fancy guppies($25), and glass shrimp($25). Would take any of those things in trade.

I'm off work this week for mid-winter break. I'll take some nicer photos when I stop by work later this week. Was sure I had some good ones, but came up empty. I'll part out if necessary, always easier to give to one person even if you turn around and drop the stuff you don't want at Saltwater City. In fact, I have a credit for two of their cheapest frags that I could give you as well.

I gave up and took it all to the LFS for store credit. Sad to see this forum so much less active. Couldn't handle the idea of dealing with CL. Saltwater City has been very nice to me, and all my critters will live to find new homes.
Share:
Facebook Twitter Reddit Pinterest Tumblr WhatsApp Email Link