After being a part of the club for awhile, I decided it was time to start my own tank thread, and getting something new is probably as good a time as any.

Just a little background. This tank is just over three years old, having been started in April of 2008. I was unconventional, and consolidated from a 75g after having it operational for a year. Now I'm wishing I had more room, but am tossing around a few ideas. I am the epitome of a snail's pace when it comes to doing stuff with my reef tank. So . . . don't stay tuned . . . or hold your breath. It'll be awhile before any upgrades are made! In the meantime, I love my little reef and the opportunities I have to watch these beautiful creatures in my own home.

This was my first time for two of the three reef stores we went to over in the Spokane area this weekend, and my hubby was such a trooper while I took my time looking everything over. Check out what I got from Barbie at Aquarium Solutions: 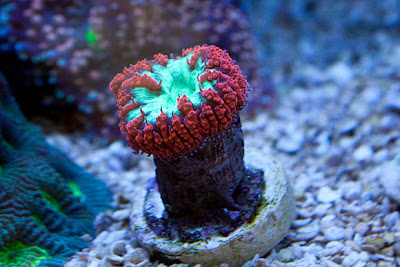 And the micromussa I got almost a year ago that was in such bad shape after shipping, is really starting to put on the growth. I love feeding this thing - it slurps down any mysis I give it. 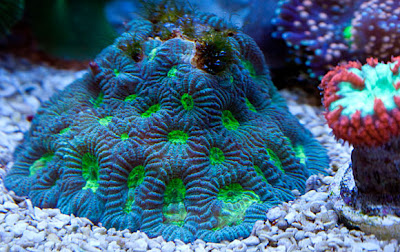 Rob - I've also got a picture of the monti cap you gave me that has turned a really different color - you'll be surprised. I just can't seem to get it to post tonight.
Last edited: May 2, 2011

Thanx for startin a thread Kim!!!! Youknow tho, we need a full tank shot in here someplace to
R

Hi Kim! Glad to see a couple pics. Like Charlie said, we need a full tank shot!! Thanks for starting this thread!

returnofsid said:
Hi Kim! Glad to see a couple pics. Like Charlie said, we need a full tank shot!! Thanks for starting this thread!
Click to expand...

Hey sid, did you get my PM from last week?
R

charlie said:
Hey sid, did you get my PM from last week?
Click to expand...

I did, and thought I'd responded, but I see I didn't...lol. I'll put together a response, in the next day or so. Thanks for the reminder!

returnofsid said:
I did, and thought I'd responded, but I see I didn't...lol. I'll put together a response, in the next day or so. Thanks for the reminder!
Click to expand...

glad to see this thread. i am curious to see how that montipora is coloring up for you. nice pics, keep them coming.

I have this one from awhile back. That should hold you until Kim can post an updated shot.

Thanks Cynthia. Wow - that's sure an old shot! Amazing how stuff grows, isn't it? Yup, I'll get a new one posted here soon so you can see how everything has grown.

Ok, I finally had some time to do tank maintenance this afternoon. The only word I can use to describe this summer for me is "exhausting". I've had so many (not really fun) things going on, that there has been almost no time to do anything with my tank. Thankfully it seems to be rock solid. Everyone is still doing ok in there. Rob, check out your green plating coral! It's getting some size to it now, and the color it changed into is great! I'll try to do a tank shot too here soon. 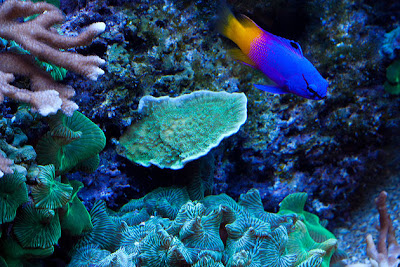 And now that the rest of the coralline has been scraped off, and the skimmer cleaned out, here's a full tank shot. The clownfish is nesting in her hammer, as usual. Pink leather, anyone? Got lots of extras! 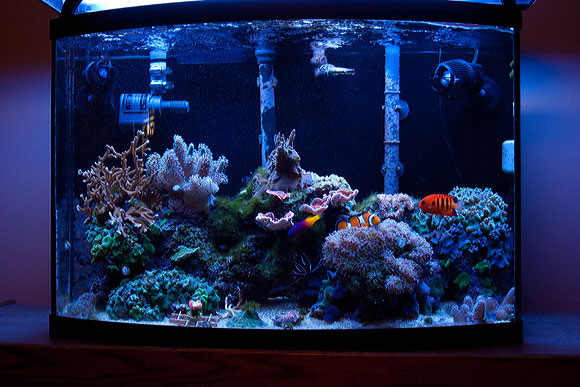 i like the color of the Montipora way better in your system. your tank looks great!!!