This is where I'll keep an ongoing log of my Biocube 14, which is my very first saltwater tank. From my introduction thread:


My name is Dylan and I just got into reefing. I'm pretty avid in FW, having 5 tanks of different sizes and purposes, from a nano shrimp tank to an African Cichlid tank. Anyways, I have a coworker who was moving and he gave a small BioCube 14 for free!


I just picked it up and set it up last night, here's what it looks like so far:

Currently it has a Fire Clownfish, and a dottyback of some sort, along with a snail or two. Apparently he had a really bad aiptasia infestation a few months ago and decided to nuke the whole tank and start again, and then kind of lost interest in the tank (which happens, I understand completely.), and then the fire clown was sent to timeout in it.


From small amount of research I already did, I'm sure that both fish are fairly aggressive and also too big for this tank, so hopefully I can trade them away or sell them or something.


Anyways, thanks for taking a look, and I look forward to interacting with all of you!
Click to expand...

bronzefighter said:
Thanks! I'm pumped to start this build and see where it goes. Yesterday I managed to find someone who would take the fish in exchange for some cured liverock. Since there was no livestock in the tank I took that time to switch out the sand for some Caribsea Aragonite Oolite. Sidenote, I love this stuff, extremely soft, looks great, helps buffer the water. I use it in my malawi tank too. With the combination of the already established filtration system, and all of the cured LR, I shouldn't see too much of a mini cycle. 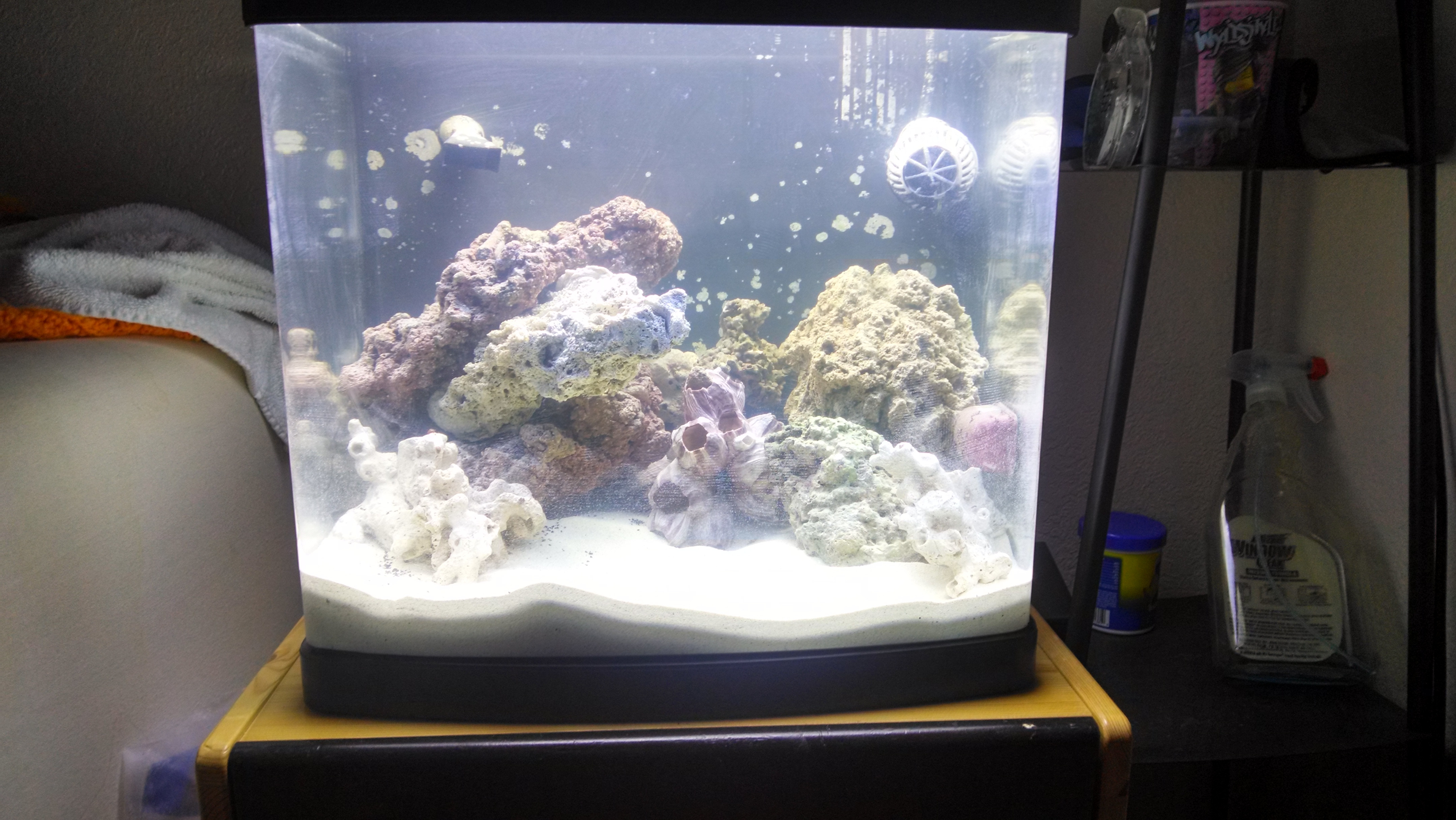 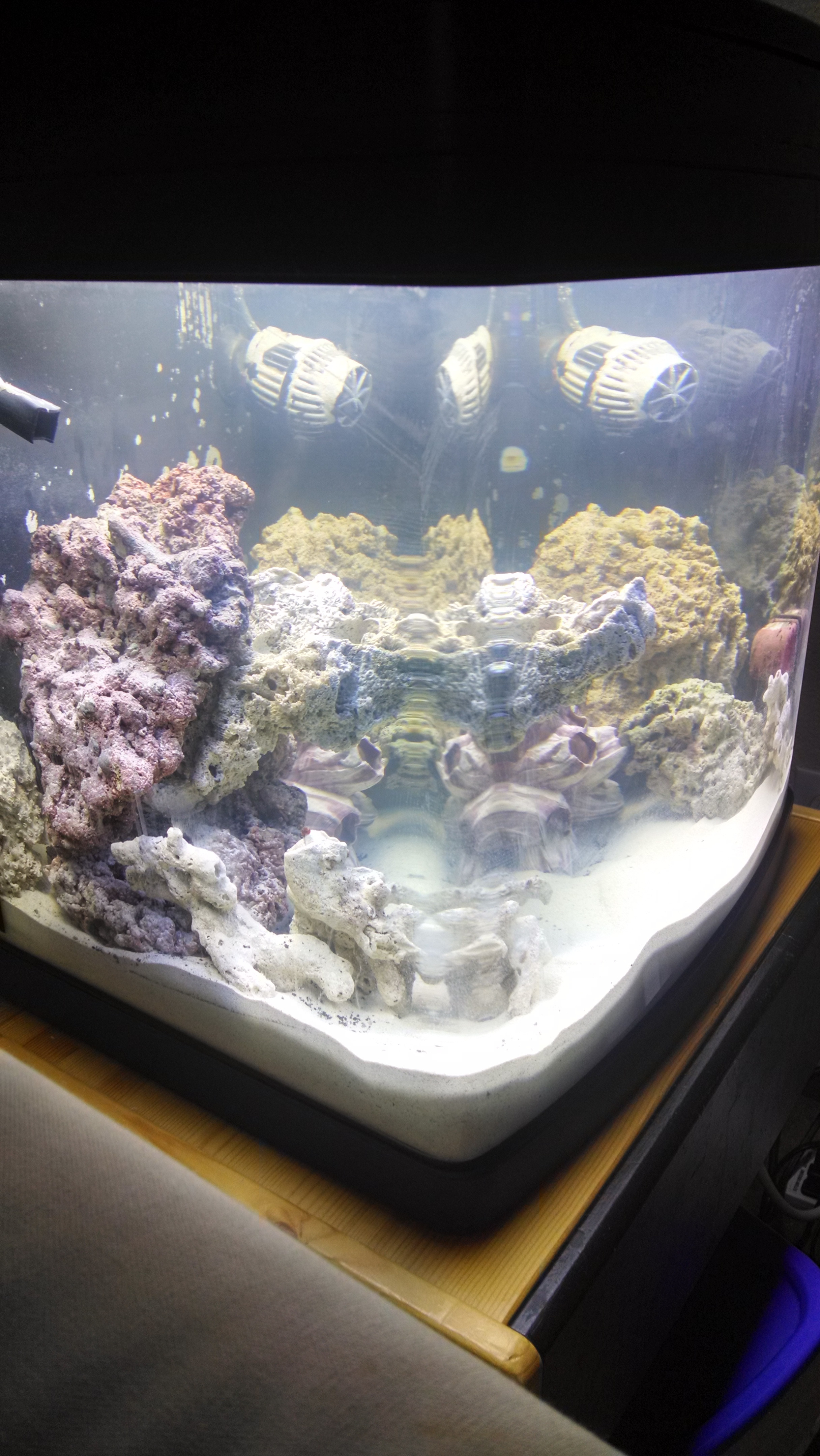 After careful consideration, I decided to jump the gun and get some fish a little earlier than I planned. I figured, with an already established filter, already cured LR, and weekly water changes, water quality shouldn't be an issue.

Plus, I already placed 3 Cortez hermits in there, and since they have been happy and healthy I figured the fish would be okay, considering that inverts tend to be a bit more sensitive.

I found a local reefer who was slowly trying to break down his tank, and snagged a pair of ocellaris clownfish from him for a killer price. My wife has been asking me to start a salt tank with clowns for years, so she was pleasantly surprised.

Next steps are to increase the cleanup crew, start grabbing some easy LPS, and modifying the filter for chaeto growth.

Feel free to ask any questions or give me any suggestions!

Now, if anyone in the area has some easy beginner corals like zoas or whatever, I'm looking to start placing them in the tank soon. Any suggestions?

Very sweet 14 A 10 minute soak in vinegar would remove the dead coralline from your power head. Make it look shiny new!
B

Thanks! Vinegar is on the grocery list, so that'll be cleaned up soon.

Sent from my XT1060 using Tapatalk

Take a drive down to Red C Aquarium in Shoreline. Rob always has a decent selection of Zoas/Palys. You might also check Dennys Pet World in Totem Lake and the Lynnwood Petco, you can usually find some nice zoas in both of them.
B

Okay, powerhead has been soaked! Also added some corals! I got some Green Buttons, pulsing xenia, Duncan, and candy cane, and placed them last night. By the end of the day all 4 of them were open and had colored up nicely. Water parameters are still in check and clowns are happy and healthy.

Next I need to look into a proper clean up crew. Currently have 3 Cortez hermits, and 3 snails of some kind. Any suggestions?

Also, does anyone have some chaeto I can have/purchase/trade for? I'd like to setup a mini fuge in the back.

Hi
Welcome!
How long have u been in the hobby? Wats ur future plans down the road?

Looks good. Nice and clean new tank.
Sea serpents and crabs and snails IMO r good cuc members. Shrimp too!
After awhile like a year or two. Ull wanna add something to clean ur sand a bit. Like sand star or narrius snails. Cerith r okay in #s

I can give you some chaeto.

1guydude said:
Hi
Welcome!
How long have u been in the hobby? Wats ur future plans down the road?

Looks good. Nice and clean new tank.
Sea serpents and crabs and snails IMO r good cuc members. Shrimp too!
After awhile like a year or two. Ull wanna add something to clean ur sand a bit. Like sand star or narrius snails. Cerith r okay in #s

Hths
And show off ur new coral,
-d
Click to expand...

This is my first saltwater tank, though I've been pretty big into freshwater for a few years now. As far as plans... keep it together I guess! I don't really have any set plans for the time being, just keep everything stable and healthy. And thanks for the CUC suggestions!


rainydave said:
I can give you some chaeto.

Have you checked out mediabaskets.com. They have some some nice products for the bc14. http://www.shop.mediabaskets.com/BioCube-14_c15.htm
Click to expand...

Thanks, I'll PM you about that chaeto. I did see those baskets, but it's hard to justify almost $50 on something I can DIY pretty easy. Something to keep in mind though.
B

Okay, updated pictures of corals! I got these from a local reefer, and am pretty happy with them. A frag of Candy Cane Coral, a few polyps of Green Button, a Pulsing Xenia, and my favorite, a Duncan.

After a few hours they all opened up, and just last night I saw the Candy Cane open up for feeding! As you can see, the clowns have taken a liking to the duncan as well.

Everything is humming along pretty smoothly now! After a brief diatom bloom, I added a CUC from Reef Cleaners. They have been munching down on any algae that pops up, and the tank looks great now. I also added a small bit of Sargassum into the tank. Pod population seems to have EXPLODED overnight, along with coralline growth. The coralline growing on the magfloat has started to grow up and out into little 'tubes,' and water parameters continue to stay in check. The corals have been doing great too, the light hasn't been on very long in this picture so their a bit closed up still.

Future tentative plans include a possible Pistol Shrimp/Goby Pair or a 6 line wrasse or possum wrasse. I'd like to look into some how adding a mangrove to the system too, either by modding the hood, or using a HOB... I'm not too sure yet.

Get the Possum Wrasse NOT the 6 Line-lol. Those 6 Lines can be pretty aggressive especially in smaller tanks.
Your tank looks awesome! Great job


Sent from my iPhone 4s via Tapatalk.
B

NanaReefer said:
Get the Possum Wrasse NOT the 6 Line-lol. Those 6 Lines can be pretty aggressive especially in smaller tanks.
Your tank looks awesome! Great job


Sent from my iPhone 4s via Tapatalk.
Click to expand...

Thank you! That's what I've heard, but I've also heard that if you add a juvienile to an established tank with already established tankmates then you can temper the aggression. I'm still on the fence on that one though :wink:

Also, my Ceriths have been laying eggs like NUTS. They've been in there for 3 days and I've seen at least 5 batches of eggs. Is this going to be a constant thing? Because while I think it's cool that they are breeding, the eggs are a bit unsightly.

Still your tank is to small for the personality of a 6 line. But it's your tank The snail eggs won't hatch, just scrape em off. It's the change that caused the to lay them in the first place.
Last edited: Jun 15, 2014
B

Update! Did some rearranging, and added some new inhabitants. I was given a beautiful piece of LR that is just covered in life- tubeworms, brittlestars, tons of Pods, few different types of worms...it also had a massive colony of Pulsing Xenia in a lovely shade of red. It looks really nice with my purple pulsing xenia (sidenote, if you're wondering why they are called pulsing xenia, youtube it. my daughter calls them grabby hands :lol: ).

Once I had it in place I noticed that it had 2 mushroom corals on it too! The only downside.... a single head of dreaded aiptasia. So I also placed 2 peppermint shrimp in there too, and theyve made short work of the aiptasia. A few days later I added a tiger pistol shrimp and what I had assumed was a Randalls Goby, but is actually an Aurora Goby. After a few days of exploring and pissing off the clowns, the tiger made a lovely little burrow right in the front of the tank. I'm hoping that the Goby pairs up with him soon. Anyways, pictures:

Very nice! Great choice on the Goby/shrimp pair
B

Thank you! I was really excited to pick these guys up, and I'm extremely pleased with them. The Aurora has been out and about, and has made a little burrow right in the front of the tank on the right-hand side, so even if he goes into hiding he's still visible. I'm hoping he'll pair with the Pistol soon, but all in good time!

Looking good. Nice colors. Like those clowns, very bright!
I